Miami Feature in the NY Times "In Miami, the Brainy Side of the Beach"

The following is an article from the NY Times, featuring Miami and Art Basel:

In Miami, the Brainy Side of the Beach 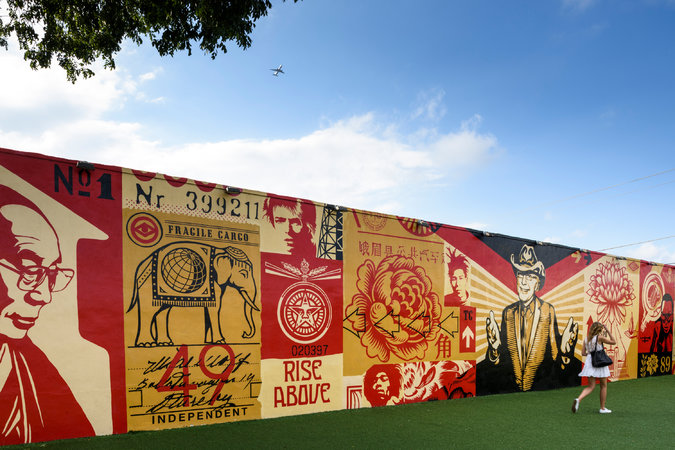 Mural by Shepard Fairey, part of Wynwood Walls, a constantly changing street art exhibit splashed across 80,000 square feet of exterior walls. CreditMoris Moreno for The New York Times
If a sellout at a musical fellow’s concert is any indication, Miami craves culture. Now, thanks to a robust economy and a legacy bestowed by Art Basel — the immensely popular art event established in 2002 that returns Dec. 3 to 6 this year — Miami has accrued a critical mass of cultural attractions. From the Pérez Art Museum Miami to the thriving muralist district of Wynwood, Miami has developed a brainy complement to its long-established beach allure. And there’s more on the horizon. Faena Forum, a 50,000-square-foot exhibit space designed by Rem Koolhaas, is set to open in April, and the Bass Museum of Art, currently closed for renovation, will add 50 percent more space with four new galleries when it opens next fall. Together, the newcomers offer rich cultural fodder outside Art Basel season if courting skin cancer isn’t your idea of vacation.Photo 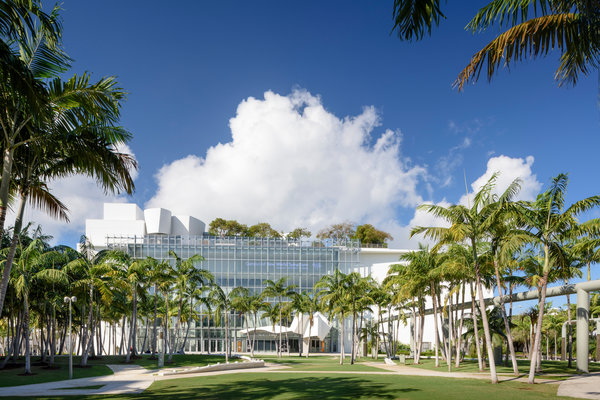 The New World Center was designed by Frank Gehry and is home to the New World Symphony. CreditMoris Moreno for The New York TimesIt’s not mine. In Miami visits past, I did what I could to dig into something deeper than a sand pail, including taking the South Beach architectural walking tour led by the Miami Design Preservation League, and going to the Wolfsonian Museum to peruse its decorative art collection — activities that, leisurely consumed, might take a day. When a friend, who lives in a gleaming high-rise in downtown’s Brickell district, promised I’d never miss the beach during a weekend last winter in what she called the “new Miami,” I had to accept that challenge. Besides, it was 10 below at home.Aside from the pleasure of immediately defrosting on the 15-minute drive from the airport to the Pérez Art Museum Miami, there was the welcome of the Pérez itself, which is ringed with a generous veranda that invited recent arrivals and other idlers to swing in hammock chairs and gaze at the Government Cut channel between gallery visits.
The $131 million, 200,000-square-foot downtown museum, formerly Miami Art Museum, opened in late 2013 in a fluid building by the Swiss architectural firm Herzog & de Meuron that seems to invite visitors outdoors as well as in. It shares the 30-acre, once-derelict Museum Park with the Patricia and Phillip Frost Museum of Science, currently under construction and expected to open in the summer.Joining a free docent-led architectural tour of the recently LEED-gold-certified Pérez, I learned it was inspired by Stiltsville, a group of houses in Biscayne Bay built over the water. Chiseled concrete panels and floor-to-ceiling windows largely wrap the building. Inside, partly shaded windows flood second-story galleries with light and views of the giant hanging planters that ring the porch.“This is a very porous space,” said the guide, Rosie Gordon-Wallace, who also runs an online gallery devoted to Caribbean and Latin artists. “You’re meant to move in and out of the building. It’s playful. You want to run around the veranda.”
By The New York Times

Designed to reflect the immigrant complexion of Miami, the Pérez focuses on modern and contemporary art from Atlantic Rim cultures, including Latin America, Africa and Europe. Inside, a group of schoolchildren sat on the floor drawing in front of “Western Sun,” an orange sunrise rendered in light tubes by the artist Mark Handforth. A few individual artists such as Gary Simmons, whose commissioned mural “Frozen in Time” filled an entire wall, got their own spotlight galleries. In the larger rooms I enjoyed making the acquaintance of the collagist William Cordova via 100 small works mounted together in homage to the jumpy editing of the late Afro-Cuban filmmaker Nicolás Guillén Landrián.As demonstrated by the outdoor-friendly Pérez, the weather isn’t central only to Miami’s beach allure. It helps shape the art scene. In the Wynwood neighborhood, north of downtown, Miami’s sultry climate and tropical palette merge in Wynwood Walls, a constantly changing street art exhibit splashed across 80,000 square feet of exterior walls by more than 40 artists. The developer Tony Goldman, who is credited with reviving South Beach as well as SoHo in New York before his death, began the mural project in 2009, inviting street artists to use the area’s squat industrial warehouses as canvases.“His goal in Wynwood was to make it an art center,” said Jessica Goldman Srebnick, his daughter and chief executive of Goldman Properties, over tea at the neighborhood’s mural-covered Wynwood Kitchen & Bar. “It’s a museum of the streets. It’s not intimidating. The scale is friendly.”

Wynwood Walls fronts Second Avenue with a mural by Shepard Fairey depicting Mr. Goldman, arms outstretched in welcome, along with portraits of inspirational figures from the Dalai Lama to Jimi Hendrix. They face off with gleeful amorphous cartoon characters by Kenny Scharf on a nearby wall. Wynwood artists on the walls and on garage doors in an adjoining plot work in an astonishing range of styles, from the layered stencils of Aiko to the photorealism of a streetscape by Logan Hicks and the painterly portraits of fantastical flirts by Vanessa Alice Bensimon, a.k.a. Miss Van.Goldman Properties has since invited artists to decorate more of its 30 buildings concentrated in about 20 vibrant blocks. I perused them with Ryan Ferrell, known as Ryan the Wheelbarrow, a graffiti artist and tour guide, who pointed out the graffiti tags that still mark the neighborhood but steer clear of defacing the murals. “Wynwood’s cool news in Miami,” he said, “but among the graffiti world, it’s a mecca.” 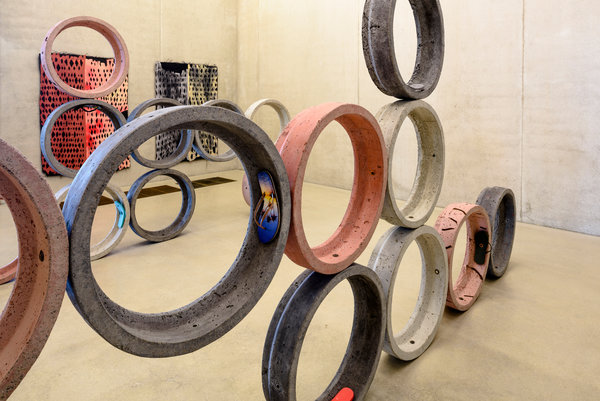 As development tools, the murals have made the neighborhood a destination, attracting mostly locally owned shops, restaurants and microbreweries. The mix of entertainment and culture has married the party to the paintings, especially during Saturday night art walks, held monthly, which draw food trucks, musicians and thousands of gallery crawlers.Back in South Beach, the New World Center offers its own night-life spectacle via a giant video wall that screens outdoor movies and concert simulcasts. It also programs late night symphonic concerts with club lighting and D.J.s. Short and sometimes free concerts take aim at younger patrons who may be wary of an extended classical commitment, leaving time to dash over to the nearby Bodega Taqueria y Tequila, a taco stand with a nightclub hidden behind the faux port-a-potty doorFrom in-the-round seating in the main concert hall to its glassed-in lobby and practice rooms, the center seems designed to rejuvenate classical conventions, beginning with its chief tenant, the New World Symphony, led by the conductor Michael Tilson Thomas as a virtual finishing school for graduates of music programs around the country. The symphony’s home, the New World Center, offers a variety of programming outside of symphony season. On a subsequent visit to O, Miami Poetry Festival — the annual event that expresses Miami’s literary depth — I caught a quintet of French Baroque singers with stylish socialites listening indoors, and the Bill Murray movie “St. Vincent” with the folding-chair-and-cooler crowd on the expansive lawn.
When I managed to beg a ticket to the winter recital by the symphony’s horn player, I joined a rapt crowd in listening to everything from Bach to the “Interstellar Call,” from Olivier Messiaen’s “From the Canyons to the Stars” performed to a celestial slide show. Seated beside me at the concert, Hilary Glen, then a first-year cellist with the symphony and a newcomer to town, confessed her initial skepticism of the city’s cultural hospitality.“I wasn’t sure I would like Miami when I got here, but I have found it very interesting,’’ she said, “and I never go to the beach.”Photo 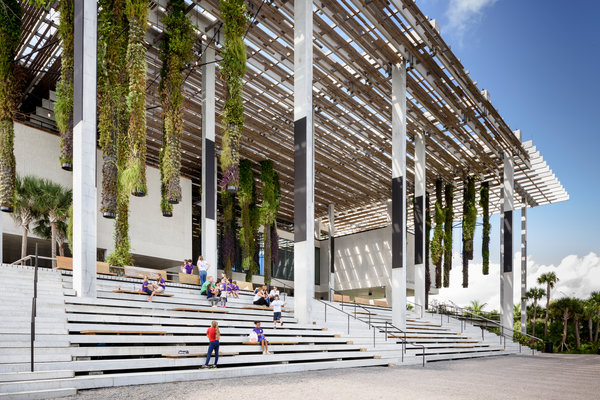 The Pérez Art Museum Miami opened in 2013 and its design seems to invite visitors to linger outside and in.
CreditMoris Moreno for The New York Times